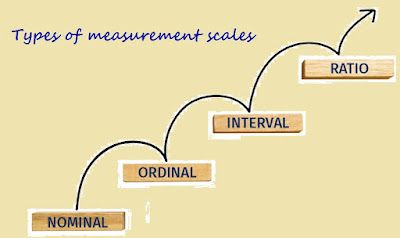 The greater the refinement in the unit of measurement of a variable, the greater the
confidence, other things being equal, one can place in the findings.
S.S.Stevens has classified the different types of into four categories:
•  Nominal or classificatory scale
•  Ordinal or ranking scale
•  Interval scale
•  Ratio scale
The nominal or classificatory scale:
A nominal scale enables the classification of individuals, objects or responses into
subgroups  based on a common/shared property or characteristic.
A variable measured on a nominal scale may have one, two or more subcategories
depending upon the extent of variation.
For example, ’water’ or ‘tree’ have only one subgroup, whereas the variable “gender”
can be classified into two sub-categories: male and female. ‘Hotels’ can be classified
into ---- sub-categories.
The sequence in which subgroups are listed makes no difference as there is no
relationship among subgroups.

The ordinal or ranking scale:
Besides categorizing individuals, objects, responses or a property into subgroups on
the basis of common characteristic, it ranks the subgroups in a certain order.
They are arranged either in ascending or descending order according to the extent a
subcategory reflects the magnitude of variation in the variable.
For example, ‘income’ can be measured either quantitatively (in rupees and paise) or
qualitatively using subcategories ‘above average’, ‘average’ and ‘below average’. The
‘distance’ between these subcategories are not equal as there is no quantitative unit of
measurement.
‘Socioeconomic status’ and ‘attitude’ are other variables that can be measured on
ordinal scale.

The interval scale:
An interval scale has all the characteristics of an ordinal scale. In addition, it uses a
unit of measurement with an arbitrary starting and terminating points.
The ratio scale:
A ratio scale has all the properties of nominal, ordinal and interval scales plus its own
property:the zero point of a ratio scale is fixed, which means it has a fixed starting
point. Since the difference between intervals is always measured from a zero point,
this scale can be used for mathematical operations.
The measurement of variables like income, age, height and weight are examples of this scale.
Types of measurement scales